Perhaps heated arguments with your spouse leave a bad taste in your mouth.  Maybe not all the time, but sometimes.  You find your way through it and everyone survives, but beneath the surface there’s a part of what went down that hangs around.

A heated argument that isn’t resolved may have more moving parts than you realize.  When you stop to break it down, there’s a lot going on, such as:

I wouldn’t for a moment suggest that you need to stop and work your way through all these complexities.  But I am a solid advocate for not letting hurt feelings, anger and grievances pile up like the overused, foul-smelling local dump.

Take some time to clear the air.

I’m sure we could come up with a myriad of reasons, but here are a few…

What you say when you’re heated isn’t necessarily what your spouse receives.  Part of the potential misunderstanding has to do with your varying interpretations of the meaning of words.  Part of it relates to your body language when you said it.

Also, sometimes what you say when you’re sparring with words may not be what you intended.  You may know as soon as the words form in your mouth that even you don’t believe them.

When there’s an airplane crash or a surgical error, a systematic review of what went wrong always follows.  A process is carried out so that the operators can learn from that tragedy to improve results the next time.

Debriefing a fight when it’s done right isn’t focused on finding out who was more at fault.  It’s about clearing up the misunderstandings and searching for your part to own. It’s an opportunity to share how you really feel, and to take in your spouse’s feelings, too.

You debrief to invest in growing closer.

You might recognize this next story if you’ve read my book Before You Split, but please bear with me. What you really won’t want to miss is the ‘how to’ that follows.

“We were supposed to be in the car ten minutes ago,” Carey said, exasperated. “You’re always making us late.”

My instant reaction: “What? Are you kidding?”

A last-minute run to the closet for beach towels vanished from my mind. In that moment, I felt myself switch from the composed-mom-getting-everything-ready-while-answering-questions-playing-referee-cleaning-always-cleaning me to the other me—the one who threw the calm me aside and took over at a time like this. She was the one who stood with feet solidly planted and rose up red-hot angry, ready to jump to my defense.

“Where were you when the kids were fighting? I’m dealing with that while making pies for who? Your friends? And racing around to clean and get us packed up? While you spent all your time making sure all the blades of grass were perfect? And making your car shiny? While I look like this? And you have the nerve to say I’m making you late?”

“This is typical you. Always behind. Never enough time,” Carey said, his frustration now palpable.

Though there was a kernel of truth in what he said, it didn’t stop the waves of contempt from washing over me and pushing accusations out of my mouth. “Who do you think you are? Ruler of the universe? Where do you get off?”

I’m embarrassed to say, this episode ended with me screaming like a crazed fool. And it ended with, “You just don’t get it. You don’t get me. I can’t take this anymore.”

Ten years into our marriage, we lived in this emotionally messy, drawn-out tension. As time went on, we both felt rising levels of frustration about not being on the same page, and because we didn’t know how to get there, our frayed emotions only made matters worse. Once we hit on a hot-button issue, we went from 0 to 100 in a moment.

Then, we didn’t typically debrief after heated arguments and we were paying the price. We were stuck in resentment, bitterness and even contempt during our lowest of lows.

Even though our marriage is honestly now a joy, it’s not that we don’t have disagreements that get intense.  We have learned to take a step back to figure out what led to us becoming so hot and bothered.  Debriefing has become a healthy part of how we keep our relationship fresh and unburdened.

One Approach to Debriefing a Heated Argument

This approach was explained to me by our long-time counsellor and friend, Craig Brannan.[i]  I’ll attempt to explain it as he did.

One word before you get started. You need to both be calm, cool and collected when you have your debriefing conversation.  If one or both of you were triggered during the argument, then you may need to wait an hour or two, or until another day to re-examine what happened.  Pay attention to your emotional condition while you’re having the conversation.  Think of your emotional status in terms of green, yellow and red zones.

If green represents you in a calm state, and red is angry or triggered[ii], then yellow is the emotional zone in between.  If you can stay in the green or lower part of the yellow zone, then it’s okay to carry on with this debrief.  However, as soon as you notice yourself heading through the yellow toward the red zone, it’s time to take a break to calm back down.

Here’s one approach to carrying out your debriefing conversation:

For example, in the story I told above, I might say “I get angry when it seems like you’re undervaluing my work.  It also makes me sad.”  That is a slice of the pie.

Carey might say, “Toni, I get frustrated when we agree to a plan, and then you don’t follow through and don’t give me any warning.”  That is another slice of the pie.

I might say, “Sometimes I feel like I’m carrying the parenting role on my own.  I could use more help on mornings like today.”  That’s another slice of the pie.

Carey might say, “I feel hurt and angry when you yell at me.”  That’s another slice of the pie.

Try to empathize with what your partner felt and intended.  Whenever you can, put your empathy into words, by saying something like, “I understand why you would feel that way.”

And then to own my slice of the pie, I might walk away with a commitment to work on self-control; to stop yelling at Carey when I’m feeling offended.  Carey would be free to choose what he’ll work on.

One thing to always consider when debriefing is apologizing. If you’ve hurt your partner even unintentionally, how can you sincerely ask for forgiveness? What do you need to say or do so that your partner understands that you’re truly sorry?[iii]

One final word of advice. If you can’t go through a debriefing conversation without heading into the red zone, don’t panic.  Take it as a caution that there’s something going on you need to pay attention to. Consider reaching out to someone – your counsellor, your doctor, a mentor, your pastor – for their opinion on how to move forward.

You will have your differences, but I believe you enter shaky space when you over-react to them.  Consciously resist acting as if your husband or wife is an extension of yourself.  Your partner is a uniquely designed human with inherent value.  You are as well.  Through debriefing and empathy, you can turn your differences into fertile ground for growing closer.

[ii] Triggered could be into extremes of anger or fear, or into feeling ‘zoned out’ or paralyzed.  In those states, your rational thinking ability is overwhelmed, making rational conversation unproductive or impossible.

[iii] This is a great reference on the different ways people accept an apology as being sincere: Gary Chapman and Jennifer Thomas, When Sorry Isn’t Enough: Making Things Right With Those You Love. (Chicago: Northfield, 2013) 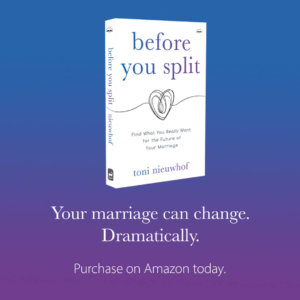