How much of your personal story should you share in public or on social media?

It’s a great question and a tough one. Some people wear their hearts on their sleeves, while others are stoic and rarely ever share what’s going on inside.  But, both are traps.

There are a few things that you and I have discovered are true about emotional pain:

Sharing the learnings that your journey through emotional pain taught you may be so helpful for others.  We all need guides who are a few steps ahead.

But, the self-focus and the sense of urgency associated with emotional pain can mislead you into thinking that you have a message for your followers, or the public, that needs to get out there NOW.

Your motives are good: you want to be real.  You know that suffering in isolation is unhealthy. Maybe you want to let others know that they’re not alone in the ways they’re suffering when no one else is looking.

Perhaps this isn’t your problem, but you’re seeing it in someone close to you.  You haven’t stopped to articulate why this is bothering you so much.

Let’s look at a couple of examples of what I’m talking about.

Tania is a friend of a friend on social media.  She’s had years of tension and distress in her marriage, and every once and a while she posts about it in a moment of crisis.  For example, she wrote “I don’t understand why he’s always ‘my way or the highway.’  I don’t get how he can be so mean to me.  What did I do to deserve this?”  While venting may serve a purpose, venting on social media doesn’t make it through the filter of ‘will what I’m posting be helpful for others?’ This kind of venting is more likely to lead to confusion, a sense of betrayal and divisiveness.

Jake is a leader who’s gained a profile and he guests on podcasts.  He recently said on an interview, “Our CEO decided not to close our operations to the public during this local crisis in the pandemic, and personally I think he made a big mistake.  He didn’t take into account how critical it is to our company’s goodwill to be seen to be community- minded…”. While pushing back on the senior leader’s decision is critical to an organization’s success overall, doing so in public does more harm than good. Public disloyalty is a problem of character.

In general, your character will make or break you – so much more so than your skills or competency.

The problem is not that you, or your friend, is poorly motivated, or lacks good intentions.  The problem is one of timing and wisdom.  Personal pain needs to be processed before you can gain perspective.

You need time to wrestle through the source of your pain, your responses to it and the impacts on your relationships with others before the redemptive aspects of the story emerge.

Just as an unmatured wine leaves a bad taste in your mouth, so does oversharing pain in public too early. 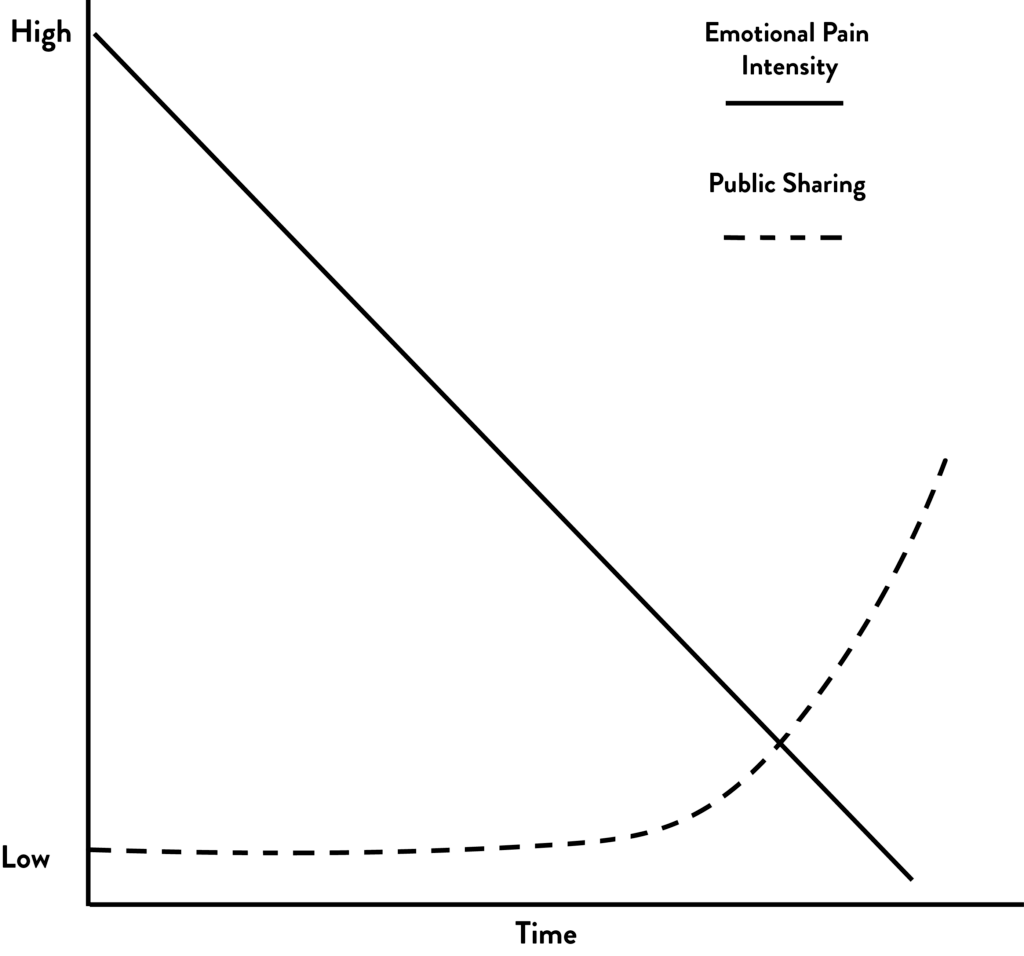 What I’ve discovered is true while processing the pain in our marriage is that there’s an inverse relationship between the intensity of the pain, and the public sharing of it.

It goes like this:  When your emotional pain is very intense, public sharing needs to be very low.  You talk to only your closest friends – the ones who have proven to be vaults.  You talk to your counsellor, and work through the difficult aspects of your intense emotions, what’s underneath them, and the insights you need to take action on.

Maybe you’ve joined a marriage, grief or other support group, where you confidentially share and process your experiences and emotional pain together with a handful of people who understand.  You share what you’re learning with each other.  I applaud you. That’s such a helpful antidote to suffering alone.

Later – once you’ve worked through the hurts with forgiveness, you’ve gained wisdom, exposed your blind spots and personally grown – the intensity of your pain will have subsided.  You have a redeemed perspective on what was an agonizing experience.  With all of this behind you, now what you have to say, others need to hear.

We need to hear your story of redemption.  We just need you to let it mature first.

Okay, so how low is low enough?  When do you know you’ve worked through your pain to the point where you have something valuable to offer others who need to hear what you have to say?

I’ve recently written a book about marriage in which I share stories about the painful season of my marriage with Carey.  I also share some perspectives I gained through my work as a divorce attorney.  Here’s a short excerpt from Before You Split:

This day’s argument followed the same old pattern. I got upset over something Carey said and shut down. Carey responded by trying, progressively more insistently, to provoke a response from me. The more he tried, the more upset I became. The angrier I felt, the more I withdrew into my silent and zoned-out world. And then at some point, I would break the silence and explode into either anger or tears. It was as though this pattern had worn a rut so deep, neither of us could steer us out of it. We were stuck.

This day I gave up holding them back. Once again, more tears. Head tilted toward the passenger window, I watched as drops patterned the sleeve of my navy suit. I looked at my hands clenched in my lap. Gripped with despair, I pulled at my wedding ring and forced it off my finger.

“There,” I said, throwing the ring on the floor at Carey’s feet. “You have it. I don’t want it anymore.”

So, how does this public sharing of our marriage struggles meet the above tests?  Well, first, this story in the excerpt happened about 15 years ago.  Since then, we took the long, slow journey to uncover the root causes of our angst and our mutual grievances.

When we were in the midst of our rough days, we didn’t share about our marriage struggles publicly. At that point, all we had to share was the intense pain we were both in. Only our few closest friends and our counsellors knew what was going on.

Gratefully, we agree that after all these years our marriage has gone from that bad to this good. We sometimes still marvel at the contrast between our relationship then and what it has become by the grace of God.

In regard to the second, it took us time to authentically forgive each other for the hurts of the past, but also to learn to consistently practice forgiveness.  If we’d tried to share our learnings about marriage before reconciling in a heartfelt way, our unresolved resentment or bitterness would have leaked out.

And to address the third test, there’s a group of about 30 people who read Before You Split and provided detailed feedback before the book was typeset.

We’re all being touched by broad sweeps of communicating like never before. We’re also seeing a lot of pain in this world. In this context, you have a choice.  You can add to the burden of pain.  Or you can add to pain’s redemption.  Let’s choose the latter.